The Casio G-SHOCK MTG-B2000XMG-1AER is the new colored wonder from the shock-resistant MTG family and breaks optically with pretty much everything I was used to from Casio! Beneath the colorful dress, however, is sophisticated and groundbreaking technology from Japan. And the fact that you can communicate with the noble G-SHOCK via app goes without saying, doesn’t it?

Casio adds color to the MT-G

Since its release in November 2020, just over a year ago, Casio’s Metal Twisted G-SHOCK – abbreviated simply MT-G – has become one of the most popular and best watches from the Japanese tech giant. A high-quality premium watch, packaged in a cool metal case and stamped with Casio’s signature. Thus, the series convinces with the use of the latest manufacturing techniques, useful functions, an environmentally friendly drive by solar energy and the connection with your smartphone. Casio took the independent and strictly adhered path alone – and was rewarded!

It should have been clear that Casio has a lot riding on the MTG-B2000 series. At the beginning of November, Casio G-SHOCK announced a new model, which is supposed to set new standards in the robust premium series and is visually up to date. Gone are the years of the mix of dark gray, light gray, steel gray and various other “colors” that have dominated the manufacturer’s product range. At least until now. There have been a few attempts to lighten up the admittedly somewhat cool drabness with colorful bezels, for example, in the past. But what the first press images of the new MT-G model show is something I’ve never seen before. The sporty carbon look of the watch is interspersed with colorful, shimmering fibers in the bezel area. Due to the special manufacturing process, each individual model gets its own distinctive look!

An eye-catcher, which you won’t  forget so fast. And although I already got to know the robust as well as smart MT-G series, I am excited about the new model, which I was allowed to test exclusively for you before the release!

An unboxing with WOW effect!

The black box is adorned with fine orange lines and looks promising. In a separate box in the packaging are all the important papers and the instruction manual. I open the valuable box with the MT-G lettering and free the watch from its protective foil. The Casio G-SHOCK MTG-B2000XMG-1AER looks stunning, that has to be acknowledged without envy. The mixture of black carbon look, colorful dial elements, screws and rose gold applications is unique and makes the Casio G-SHOCK MTG-B2000D-1AER, which I tested last, look almost old. This watch was also really successful in my opinion. But what the G-SHOCK designers have come up with now is in a different class.

Somehow, the Casio G-SHOCK MTG-B2000XMG-1AER almost exudes 80s vibes with its neon-like look, which isn’t even surprising. After all, the Japanese manufacturer made its breakthrough on the watch market in this decade.

Not only the individual models can be called unique in all conscience due to their special random manufacturing process. Even the individual specimen always presents itself differently, as I notice when I go out onto the terrace with the watch on my wrist. The inner edge of the bezel shimmers in rainbow colors and always looks different depending on the incidence of light.

And while we’re on the subject of wrists: Here, the latest addition to the MT-G series knows how to please. Personally, I like the mix of sporty colors, charming retro feeling and the Casio-typical, lovable “chunkiness”, which has always made the watches of the traditional manufacturer something special. The sporty dimensions of 55.1 by 49.8 millimeters are also responsible for this. So you should already have a certain wrist circumference. The height of 15.9 millimeters is a big number, too. Nevertheless, the Casio G-SHOCK MTG-B2000XMG-1AER doesn’t look like a dark behemoth at all, thanks to the playful colors. “The G-SHOCK MTG has grown up”, I wrote in my watch review of the sister model. I would now like to take that back in a positive sense.

Groundbreaking materials for the case

In its basic structure, the case of the Casio G-SHOCK MTG-B2000XMG-1AER resembles the 2020 models. Of course, it is primarily distinguished by its namesake gravity shock design, which has made G-SHOCK watches popular. The “Triple-G” principle includes the following features: vibration, shock, and centrifugal force resistance. So this watch is just made to be active.

To withstand such high stresses, Casio manufactures a so-called monocoque case, which is made of carbon. This “Carbon Core Guard” structure is especially visible when you turn the watch over and look at the massive, black case back. The high carbon content of the components gives the Casio G-SHOCK MTG-B2000XMG-1AER a fairly light weight of just over 150 grams. That has a positive effect on wearing comfort. The carbon core is encased by an outer shell. This consists of a progressive stainless steel-resin mixture. Thus, the G-SHOCK MTG saves further weight and gains hardness.

Diving skills also possess the colorful watch. Casio gives a remarkable value of a maximum diving depth of 200 meters, so the Casio G-SHOCK MTG-B2000XMG-1AER can take on many diving watches. This also requires a pressure and shock resistant watch crystal. It is made of sapphire, the hardest and highest quality glass.

Why every single Casio G-SHOCK MTG-B2000XMG-1AER is individual

Let’s move on to the most exciting part of the case, the bezel. Its special design does not come from painting, but from a novel process, as Casio says. Carbon and colorful glass fibers are randomly laminated, which creates the characteristic layered pattern. The watch is said to be adapted from the South American Rainbow Mountain, whose individual, colored mineral layers come from plate tectonic processes.

The resulting, individual design is rounded off by colorful ion platings (IP’s) on the inner rim of the bezel, the outer screws and the crown. Additionally, you’ll find a rose gold IP on the clasp of the resin strap.

Casio has equipped the G-SHOCK MTG-B2000XMG-1AER with a variety of functions. These are state of the art. Every other G-SHOCK will have to compete with the MT-G. The most important functions are set by the purple crown and the four pushers. My tip: download the G-SHOCK Connected App anyway. It is intuitive to use and controls everything the Casio G-SHOCK MTG-B2000XMG-1AER can do via Bluetooth connection. Alarm, timer, stopwatch, world time, an auto calendar and much more can be found at a glance on the user interface of your app. In addition, the app provides you with useful information like the battery status and can even activate the energy-saving mode. There is also a phone finder. If you press a button, your smartphone sends a sound when connected via Bluetooth!

I have to admit that when I got my Casio G-SHOCK and EDIFICE watches (which use a similar app), I was skeptical at first. But now In think that it belongs to every G-SHOCK!

The Casio G-SHOCK MTG-B2000XMG-1AER is controlled by three dual-coil motors, which in turn get their energy needs with environmentally friendly solar technology. Casio installs its “Tough Solar” system, i.e. solar cells under the dial. In normal operation, the battery lasts 5 months without needing to be shined on by light even once. In energy-saving mode and when stored in the dark, even a maximum of 29 months is possible!

The wealth of information offered by the Casio G-SHOCK MTG-B2000XMG-1AER is displayed in a structured manner on the sporty-looking dial. Its readability has once again improved significantly compared to the dark Casio G-SHOCK MTG-B2000D-1AER. This is due to the hands, totalizers and indices, which are now no longer dark gray, but shine in blue, pink and orange. In the dark, LED lights additionally ensure that you keep track. In addition to seconds, minutes and hours, you can read the date, the day of the week, a countdown, a world time and the respective mode (timer, alarm, stop time) from the dial.

Finally, a few words about the wristband. Here, Casio relies on an interesting solution made of synthetic resin, which is surprisingly comfortable on the wrist. It offers enough resistance to environmental influences to wear the watch during all kinds of sports activities, which are without a doubt the strenghts of the Casio G-SHOCK MTG-B2000XMG-1AER. I like the rose gold buckle, which echoes the unusual design of the watch!

My conclusion about the Casio G-SHOCK MTG-B2000XMG-1AER – squaring the circle?

I had incredible fun photographing this masterpiece of a watch. Visually, no other wristwatch can beat the Casio G-SHOCK MTG-B2000XMG-1AER! The brute timepiece has a unique selling point with high recognition value due to its colorful glass fibers and ion plating.

Add to that the long list of useful features that I already praised so much in the sister model from the MT-G series. Controlling these via app is intuitive and fun without feeling like you’re just wearing a smartphone on your wrist. This should make the Casio G-SHOCK MTG-B2000XMG-1AER especially interesting for those of you who have been skeptical about the topic of smartwatches so far.

By using smart materials like carbon, resin and blends, Casio manages to make the MTG-B2000XMG-1AER a high-quality, very lightweight and durable high-tech watch.

Has Casio literally managed to square the circle with this watch? This is ultimately decided by your own taste. If the timepiece is too colorful for you, you can go for the simpler alternatives that the series has on offer. The MTG-B2000XMG-1AER is now available at an MSRP of €1,099.00. You can find all the important links below.

More about Casio and the G-SHOCK MTG-B2000XMG-1AER

Here you can order the model 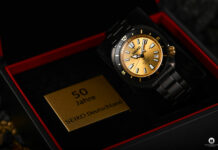