TVA is followed by TVB – with the Casio G-SHOCK GMW-B5000TVB-1 Virtual Armour, Casio releases a new model of its “Titanium Virtual Armour” edition. Disguised in a geometric camouflage look, the watch revisits the design of the very first G-SHOCK. Now, shortly after the market launch, Casio has sent me a copy. Reason enough to take a closer look at the B5000 collection.

The release of the new GMW-B5000 “Titanium Virtual Armour” is reason enough to look back once again and look at an old watch test. A little more than two years ago, I was able to put the Casio G-SHOCK GMW-B5000TB under the microscope. I remember the model well. The design, with its distinctive octagonal bezel, is based on the very first G-SHOCK ever, the DW-5000C. Unlike the Casio G-SHOCK MRG B5000B-1DR, however, the GMW-B5000 is not a reissue of the classic from the 80s. The watches have enough independence, which is already clear from the creative color selection of the individual references. The idea behind the GMW-B5000 is based on the idea of a G-SHOCK made of high-quality metal. Thus, the collection has always been aimed at buyers who appreciate the iconic 80s design, but do not want to give up “classic” materials from the watch industry.

Whereby – classic? This term is actually somewhat out of place here. Casio discovered a long time ago that the high-end material titanium with its properties fits the G-SHOCK image perfectly. Within the collection, you can choose between titanium and conventional stainless steel. During my test of the GMW-B5000TB, I have only come into contact with titanium so far. Besides the new Casio G-SHOCK GMW-B5000TVB-1, Casio also sent me two other variants. One is the reference GMW-B5000PB-6 in purple 80’s garb, the other is the Casio G-SHOCK GMW-B5000TVA-1. While the former has a stainless steel case, the TVA-1 is perhaps most similar to the novelty, just a bit more inconspicuous.

Enough about the preface, now it’s time to unpack! My copy of the TVB-1 is one of the first ever. At retail, the model will be available in a neat, classy box that has collector value itself. Every single reference in the collection has color-coordinated packaging. Fans will get their money’s worth.

There they are, unpacked on the table, the three test candidates – one more beautiful than the other. My favorite remains the Casio G-SHOCK GMW-B5000TVB-1, but the Casio designers have mastered the challenge of designing each model individually and creatively. The purple PB-6 is probably the most peculiar. Its garish color scheme is inspired by the colorful neon lights of the vibrant global metropolis of Tokyo. The Shibuya district is where this watch feels most at home.

TVA and TVB are revisiting the themes of virtual reality, gaming and science fiction with their clean lines. This approach is exciting. The retro wave in all honor, but I find a futuristic design much more exciting than the tenth new edition of a classic. You can see that Casio is not only looking into the future visually, but also technically, when you look at the inner workings and the functions.

However, you should have worn all three watches on your wrist beforehand. The first differences between the titanium siblings and the PB-6 are already noticeable here. I am and remain a friend of stainless steel watches. But the VW Golf among case materials simply can’t compete with the lightness of titanium. For comparison: the 167 grams of stainless steel are offset by 106 grams of titanium. Ultimately, everyone has to decide for themselves how important the weight savings are to them. However, I would no longer want to do without the comfort of titanium in everyday use.

Even though this review is primarily about the TVB-1, its dimensions are similar to its siblings. All three models measure 49.3 × 43.2 millimeters between the ends of the case and 13 millimeters in height. As a result, the G-SHOCK GMW-B5000TVB rests on the wrist in a decidedly sporty manner.

Visually, none of the three watches is limited to one “area of use”. A violet PB-6 on the wrist in the office? Why not, actually. The days when G-SHOCKS were dismissed as cheap digital watches by self-proclaimed experts are long gone. Take a pinch of retro charm, some functionality, a touch of sportiness and prestige. The GMW-B5000 knows how to combine these ingredients in a balanced way in a visually successful wristwatch.

However, good looks alone have not yet earned a watch the title “recommended purchase”. Quality and functions should not be neglected. Casio has come up with a few tricks to refine the Casio G-SHOCK GMW-B5000TVB-1 and raise it to premium level. The basis is the titanium just mentioned, which is not only lightweight, but also extremely heat-resistant, scratch-resistant and flexible. And as if that wasn’t enough, most surfaces have been given black and brown ion plating. The cherry on top of the cream pie, you might say. The side effect is the stunning, polished look. This workmanship is impressive, and the case finish is successful. A comparison to the MRG, the ultimate G-SHOCK, is also interesting. The Casio G-SHOCK GMW-B5000TVB-1 and the TVA-1 do not have to hide. But the quality of the B5000 series does not drop.

I noticed one difference between the TVA and TVB. Unlike the novelty, the specification list of the older TVA states that the watch has been finished with an additional DLC coating. With the naked eye, it is impossible to see any differences in the composition of the material. I cannot give you reasons for the different specifications.

A G-SHOCK runs for 10 years, is water resistant up to a pressure of 10 bar and survives falls from a height of 10 meters. The principle has been valid for 40 years. However, the values have been improved. A six-fold screwed case back now ensures that the Casio G-SHOCK GMW-B5000TVB-1 is still water resistant to 200 meters. Scratch-resistant sapphire crystal protects the display from drops and ensures shock resistance. Thanks to a special anti-glare coating, the display can be easily read even under the open sky and sunlight.

The multicolored bezel blends in perfectly with the geometric camouflage style. Orange color accents round out the overall look. They give the Casio G-SHOCK GMW-B5000TVB-1 sportiness and temperament. Likewise, the watch gains clarity.

Under the black-brown-gray robe with its laser engravings is a drive that is powered by solar energy. The solar cells sit well hidden in the dial. Excess energy can be stored and then used should the Casio G-SHOCK GMW-B5000TVB-1 disappear in a drawer for a longer period of time. This economical drive is not only efficient, but also sustainable. The Tough Solar system is now making its way into more and more models from Casio. The manufacturer seems to be prepared for the future.

In addition to the solar drive, the smartphone connection has also become a trademark of Casio in recent years. I said a few words about the diverse functions in my last watch tests. So diverse that they can only be touched on briefly.

Via Bluetooth, Casio G-SHOCK GMW-B5000TVB-1, TVA-1 and PB-6 are connected to the G-SHOCK Connected app, which takes just a few minutes to set up. Then you have access to features like alarms, world times, clock settings, stop times, battery indicator and more. While most of these features can also be operated analog via the pushers, it’s easier and more intuitive via app. Nevertheless, I have observed that using the smartphone in everyday life does not get out of hand.

The most important information is read from an LCD display. With bright LED Superilluminator, the dial is easy to read even in the dark.

Between the lugs, Casio G-SHOCK GMW-B5000TVB-1 and TVA-1 exclusively feature an elongated hole, the trademark of the “Titanium Virtual Armour” edition. It offers a view of the synthetic resin buffering beneath the surface.

The bracelet itself is also made of titanium. Anything else would have been a bit of a disappointment. I like the design solution of the TVA-1. Without wanting to discreetly hide the information, it says on the bracelet which links can be removed for shortening. The wearing comfort is pleasant.

MRG or GMW B5000 – which watch is the legitimate successor to the first G-SHOCK? Of course, the MRG copies the design of the DW-5000C down to the smallest detail and offers just about everything the Japanese watch manufacturer has to offer. Cost point: 4.000,-. A bit closer are the watches of the GMW-B5000 collection. But that doesn’t mean that the Casio G-SHOCK GMW-B5000TVB-1 and its sister models have to hide. Here, too, you get high-quality materials, even titanium if you wish. Technically, the watches are state-of-the-art and leave nothing to be desired when it comes to connectivity with the smartphone.

But my absolute highlight is the design of the Casio G-SHOCK GMW-B5000TVB-1. The look is new, different and fresh. The watch does not try to imitate an existing model, but attempts a futuristic creation of its own – with success.

As of July 2022, the collection comprises 11 models. Non-binding price recommendations can hardly be found. However, you have to pay around 2,500 Euros for the TVA-1 on various online portals. The model is popular and therefore quite out of stock. I assume that this will also happen to the Casio G-SHOCK GMW-B5000TVB-1. So, be quick! 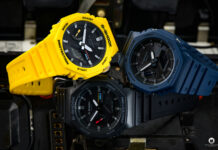 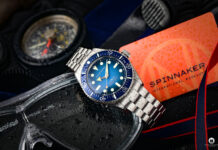 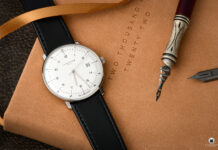 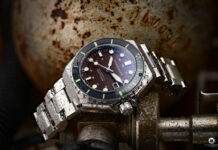